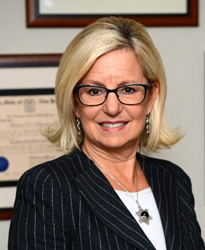 An equity partner in the Family Law Department of Lomurro, Munson, Comer, Brown & Schottland, LLC, BETTINA MUNSON has more than 25 years of experience in matrimonial cases. She successfully litigated the first U.S. case in which a non-biological mother in a same sex (domestic) partnership was awarded shared custody. She has extensive appellate experience and has published cases in both Family Law and Civil Litigation.

Bettina has developed an impressive track record litigating relocation cases throughout the state of New Jersey – and was instrumental in our Firm winning the seminal case, Baures v. Lewis. A strong proponent of mediation and collaboration, she served as the co-chair of the Family Section of the Monmouth County Bar in 2011-2012 and serves as an Early Settlement Panelist in Monmouth County, the Monmouth County Collaborative Divorce and Mediation Professionals (MCCDMP), and Collaborative Divorce Professionals (CDP).

In 2003, Bettina was designated a Certified Matrimonial Law Attorney by the Supreme Court of New Jersey – a designation limited to those attorneys with significant involvement in trial matters in Superior Court; an unblemished reputation as attested to by judges and attorneys; and substantial knowledge and continuing legal education demonstrated by passing a special written examination on trial practice.

Appointed to the New Jersey Supreme Court Committee on Domestic Violence in May 2008, Bettina also served on the Board of Governors for the New Jersey Association of Justice and is co-chair for the Family Law Section and is a member of the Monmouth Bar Association.